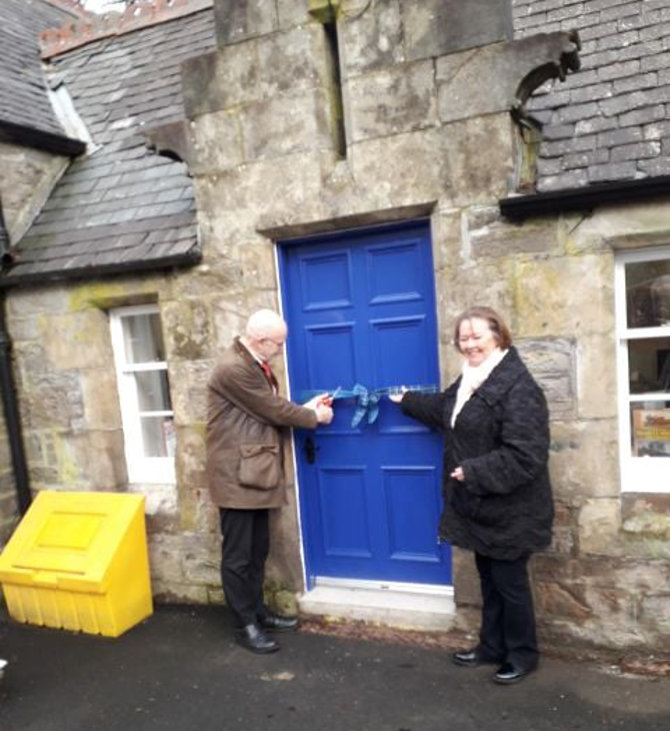 We were delighted to welcome Andy Savage of the NRHT to Pitlochry in February to cut the ribbon and formally open the Bookshop Extension in what had been the old Victorian Ladies Toilets. We also welcomed to this small gathering the original Chairman, Norman McCandlish. A valuable addition to the premises, which has been a godsend in these pandemic times. It allows donated books to be safely stored for 72 hours before sorting and transfer into the main shop. Who would have thought that an initiative begun in 2005 selling second hand books from a picnic table on the platform would have resulted in 3 rooms being renovated and over £300,000 being raised for charity.

The Bookshop Committee raised all the monies to not only fund the renovation, but also to purchase custom built shelving to make the best use of space in this tiny room. As the entire building is Grade 1 listed, it was a daunting task to replace individual sash windows, brass fittings and also clean and preserve the Victorian Urinals next door, but that room is a project for another day.

Post Lockdown, we heard that the project had been shortlisted for a National Railway Heritage Trust Award, so we are thrilled that the hard work and achievement of the Bookshop team has been recognised. Well done to them.

We welcomed an old friend, John Yellowlees – ScotRail Honorary Ambassador, to judge their endeavours in August.

August 14th 2019 saw the return of our beautiful Victorian Fountain to Platform 1 at Pitlochry Railway Station. The major platform extension and re-surfacing element of the HML upgrade undertaken meant an opportunity to further restore the fountain, as it had to be removed whilst works went on over the winter of 2018/19.

David Ogilvie of Ogilvies Ironworks in Kilmarnock came to inspect the fountain in late 2018 and a few hairline cracks were identified. There was also the vexed question of the missing taps and the resultant holes. As the fountain was not going to be used for drinking water due to lead fixings and lead pipes connecting it, it was agreed to restore the cracks, fill in and mould thistles over the tap holes and make a proper secure fixing plate for the future.

Once this was done, the fountain was powder coat heat sealed to prevent any rust. (With the copious amounts of salt used on the platform in winter and gravel being thrown into the basin, rust had formed where the paint had been chipped).

Pitlochry Station Liaison Group and HML CRP would like to thank BAM Nuttall for generously sponsoring this restoration project and the wonderful Celebration Tea Party held in Fishers View Court afterwards and the amazing cake!! 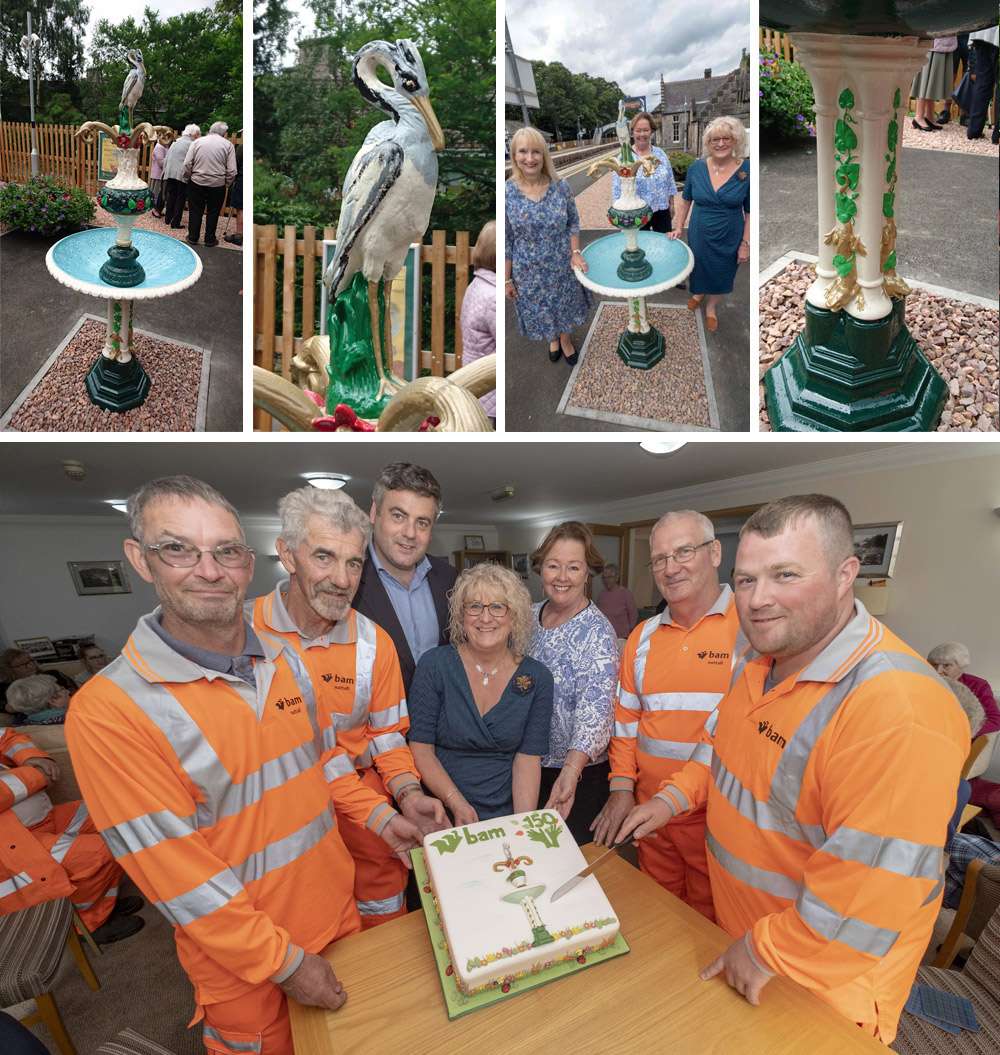 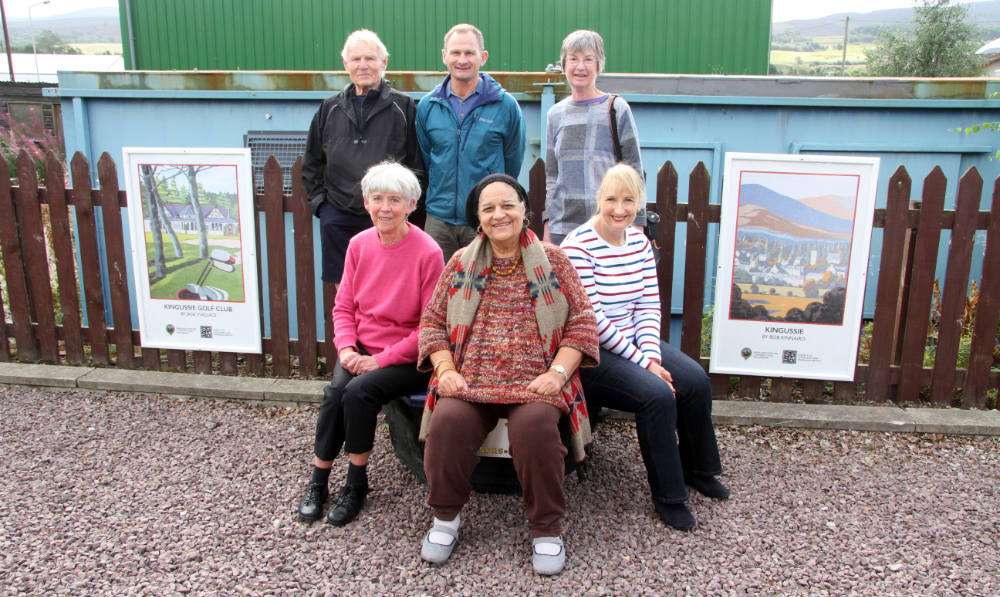 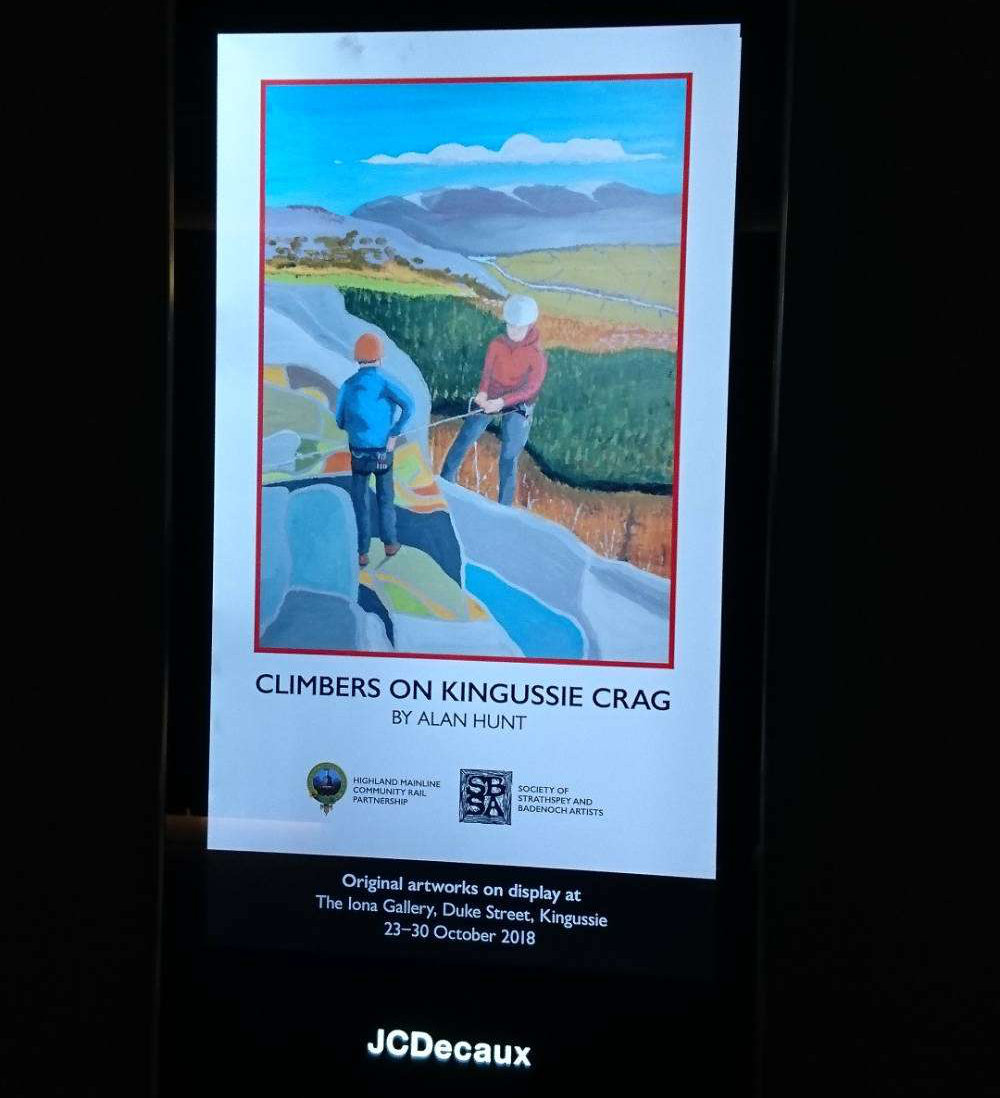 An update on the collaborative art project between HMLCRP and Society of Badenoch and Strathspey Artists (SBSA):

Twelve months on, and the project has proved to be a great success. Not only did it provide Kingussie with some wonderful posters to brighten up the station, it also provided the SBSA with the chance to stage a unique exhibition of the original artworks at the Iona Gallery in Kingussie. The exhibition lasted for a week, and was very well attended. Representatives from HML CRP attended the opening night, presenting the SBSA with a cheque for £500.

Despite the project having being entered unsuccessfully into ScotRail and ACoRP competitions, the wonderful posters have become a very popular fixture at Kingussie and are very much admired.

2. Part of the electronic display at Glasgow Central Station (Climbers on Kingussie Crag, by Alan Hunt).

HML CRP were able to give an early Christmas Present in December 2016 to the Bookshop volunteers, who have now raised over £250,000 for charity since opening in 2006, a cheque for £4,500 was presented to Roger Haworth - Representative of Bookshop by Sally Spaven - Chair , Ailsa Schofield - Hon Secretary and Kate Howie - Treasurer, all HML CRP.

They were joined by Allan Brooking, the ScotRail CRP's Community Liaison Executive, who was supporting the HML CRP. 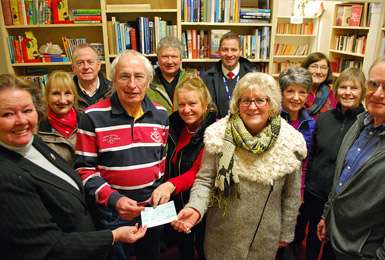 HML CRP received funding in August 2016 from ScotRail for a Project focussing on the Heritage of the line and stations, each community is working on their own element and it will include 2 Interpretation Panels of Archive material and photos for display at each of the 8 Stations, and a line guide/map in hard copy and on-line. The Heritage Map was finished in June 2018 and we are now working on accompanying panels and a future Tourism booklet. There has been a delay on this project as we hoped to work with Locus Guides of Stow originally, but then had to source a new provider when they pulled out. Jules Akel worked on the Line-Guide/Map, and we acknowledge help and support from the Cairngorms National Park Authority, Neil Sinclair - Author and Dr Ann Glen of the Scottish Association for Public Transport. Match funding was provided by the Pitlochry Partnership and the Enchanted Forest Trust for the map element and we have also secured some funding from the Pitlochry Tourism Trust for the panels.

We received funding for our Branding Project in November 2016. We were delighted to work with Jules Akel, Graphic Designer, of Dalwhinnie on finally designing our new Logo. And here it is. We also commissioned new floral containers at the 8 Stations to promote our CRP.

Branded signage was made for the floral containers and also banners for using at HML CRP events, both meetings and social/community events. An element of this funding was also for running costs of our Website. www.highlandmainlinecrp.co.uk for the next 12 months.

As a group, we remain loyal to our Communities and will use local businesses and artisans wherever possible. 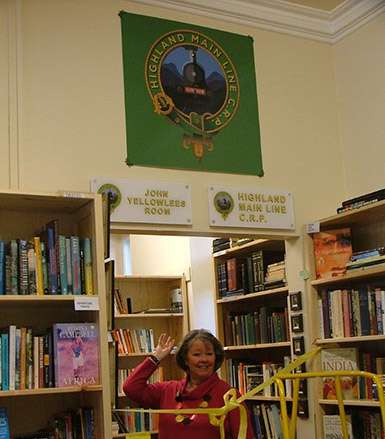 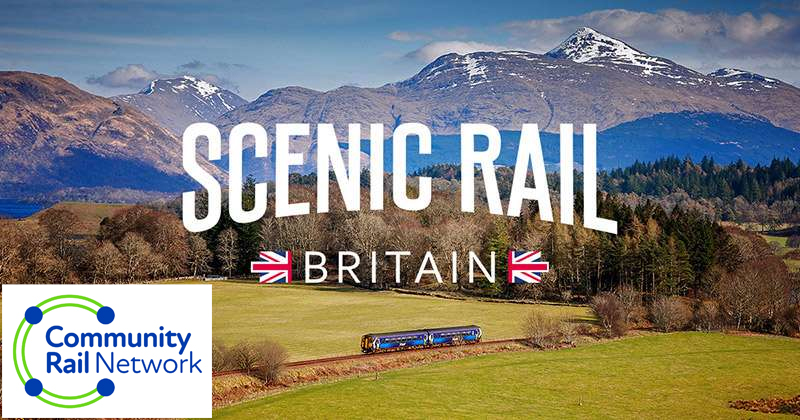 View our page on Scenic Rail Britain for more information

Our official launch took place in Pitlochry in November 2015 and was jointly sponsored by ACORP and the Pitlochry Partnership. Pitlochry in Bloom sponsored an amazing cake and we welcomed over 40 representatives from industry, Scottish Government, Partners and community groups. We are very grateful for everyone's support in making possible a most enjoyable day of celebration.

Our own website www.highlandmainlinecrp.co.uk took a while to put together. Whilst recognising we will not ever be a busy commuter line except perhaps to the cities of Inverness and Perth from our extremities, we have been looking for our own distinctive identity and have decided to promote the Heritage of our line and use some of the material collected for the 150th Celebrations. We feel that any sustainable increase in passenger numbers can only viably come from persuading more visitors and tourists onto the line. We know that under 10% of visitors to the Cairngorms National Park travel by public transport, so there is huge potential there. We have embraced social media via our Facebook and Twitter accounts and have encouraged the local communities to engage with us and share aspirations for the HML.

To draw up plans for Conservation of Pitlochry Station Northbound Buildings.

We were able to secure the services of a local Architect, who has drawn up plans for the renovation and conservation of the Northbound Offices on Platform 2 at Pitlochry Station. This is a wooden Swiss Chalet style building dating from 1898 and Grade A listed. ACORP kindly funded this for us and the plans are now with the National Railway Heritage Trust and Network Rail as we slowly progress work on the roof and chimneys and external salt storage. Both offices will be for Community Use, one for Pitlochry in Bloom and one for the HML CRP.

Having previously worked with Dr Matthew Alexander of Strathclyde University, we were delighted to welcome, not just one, but five International students, completing their PhD's. We tried not to overly influence their work, as coming from vastly different areas of the globe to Scotland, we felt it important to see what they had to say about us. We are still working our way through their recommendations on Marketing for our line.

We certainly hit the year running. End of March 2015 saw us off on a Familiarisation Trip (pictured above) of all 8 stations accompanied by Transport Scotland, Tactran, Mike Dennison of Sustrans - Cairngorms National Park, John Yellowlees - External Relations Manager ScotRail, Jim Wilkin - ACORP Project Officer and our PhD students from Strathclyde University. On the most glorious day and fortified by bacon rolls, coffee and tea and sunshine we all met at Dunkeld & Birnam to begin. Beatrix Potter and Peter Rabbit, Andrew Heiton Jnr and Dougie Maclean all got a mention, concern about the very low platform was discussed and then it was off to Pitlochry.

A whistle stop tour of all the buildings, one of which we hope to acquire as an office for our CRP in future and a look at the very successful Station Bookshop and next was Blair Atholl. Our visit there succeeded in gaining a door on the Waiting Room, so an early success. We met Deborah at Dalwhinnie and admired the 2013 Heritage Panels, leading us to a future project for all the Stations. Newtonmore next, a wonderful conversion of a Signal Box into a holiday let and then Kingussie, where sadly the Council are moving out of the Station and the buildings are up for sale. A quick lunch break at the Grant Arms and a presentation to Jim Wilkin who had supported us through the tortuous process of Constitutions and paperwork, but sadly wasn't continuing his journey with ScotRail. Next stop was Aviemore and the Cairngorms views and finally Carrbridge Station where the Station Group supplied much appreciated cakes and tea before we all headed home. The day saw us cover 200 miles, and some many more! But it allowed each of us to appreciate the problems faced at every Station. We are now working up a detailed Station audit and hope to have a comprehensive document for future reference.