Pitlochry is one of 3 Grade A Listed Stations on the Highland Mainline Railway.

Pitlochry is very proud of its busy Station, not least of the Station Bookshop, which has raised a considerable for charity since opening, it is run by volunteers. Direct links to Inverness, Edinburgh and London Kings Cross make for pleasant travelling and enjoying the stunning scenery.

The South-bound platform (up) building was designed by Murdoch Paterson, in the Scottish Tudor style. It takes the form of an H-plan with ornamental gables and an awning filling the recess. Details include terracotta roof ridging, a variety of finials and tall ornamental chimneystacks. A small niche in the building near the present ticket office once housed the beautiful brass Station bell. An ornate Drinking Fountain, a MacFarlane 7, from the Saracen Foundry sits further along the platform and has been here since at least 1911.

The North-bound (down) platform has a wooden pavilion constructed of pitch pine panelling, a bell cast roof and ornate iron cresting. The pavilion consists of three rooms, a ladies waiting room on the right, a general waiting room in the centre and the old goods office on the left and dates from the end of the 19th century. The Highland Main Line celebrated the 150th Anniversary in 2013, to commemorate this celebration, this waiting room contains a photographic exhibition about Pitlochry Station in days gone past. Central is the new Mural designed and painted by S3 pupils from Pitlochry High School and Breadalbane Academy, who also designed and painted the colourful posters along the railings.

We are very pleased to tell you that Pitlochry won the STATION OF THE YEAR (MEDIUM) award 2019 at the NATIONAL RAIL AWARDS on 19th September 2019 at the Grosvenor House Hotel in London. 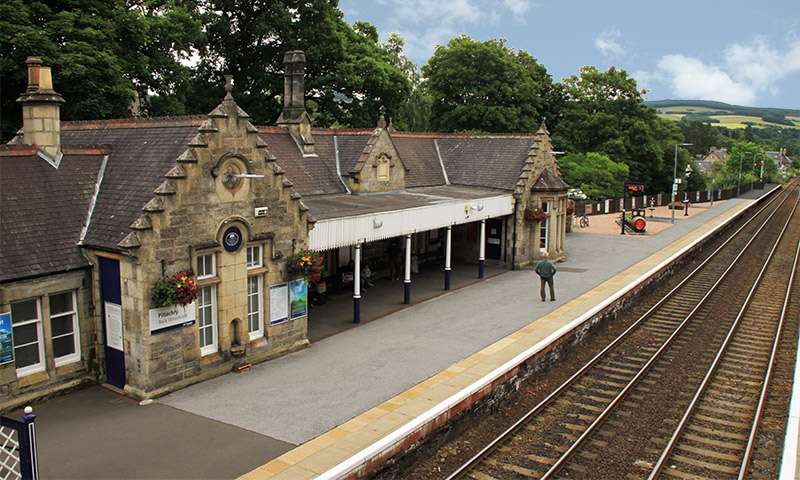